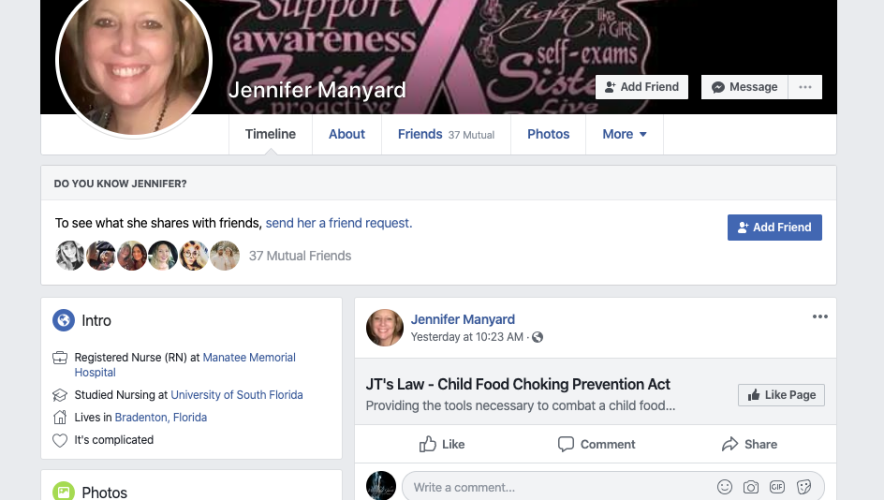 On Saturday Dec 28th 2019 a citizen of Hardee County messaged me asking if I could look into an account on Facebook. They stated is seemed like this account was “stalking/catfishing” tons of people here. These citizens are girls and are a little freaked out. The account in question is this one.

Most fake accounts don’t name the account and as you can see this one still has the account ID as the name in the link. After searching the image used for the profile picture I can across this article from Nov 2014. Seems the lady used as a profile picture died from “Choking”. Link below.

A quick call to Manatee Memorial revealed that they have no records for an RN named Jennifer Manyard.

Anyway, talking to a few people they referenced me to an old story about a man that was “Fake choking in public for attention”. Here are a few links.

Shortly after this another Citizen told me because the account seemed to be obsessed with “Choking” it sounded like Lawrence (Larry) Factor who worked at Hardee County Fire Rescue. So I researched him and found a few things, and guess what? They were about “Choking”.

One source who was a friend of his stated that Larry was obsessed with Choking and was in fact the man in the stories from 2003. They went on to say that Fire Chief Choate and County Manager Lex Albritton covered it all up. Talking to this source more they stated that “his wife was super controlling and checks his phone often so if this account is his he’s probably using a computer at the Fire Station in Zolfo where he works now”. They also stated he had to undergo mental health treatment. So is this “Jennifer” account Larry?

At this point I asked the person who brought this to my attention if they could send me screenshots of the conversations they had with this “Jennifer” account. Reading through them guess who’s name came up? Yep, the “Jennifer” account talks about Larry/Lawrence. Praises him and even knows Larry’s wife is super controlling.

In another conversation the “Jennifer” account states that her profile picture is her Aunt. When actually it’s a dead woman.

1-No one knows who Jennifer Manyard is.

3-the “Jennifer” account is pretending to be a woman and flirting with girls from Hardee County.

4-Is this Larry behind this account? A simple subpoena to Facebook for Login details will tell you that.

The “Jennifer” account has been sending private messages to certain people in Hardee County. This account has even sent pictures of woman stating they are of “her”.

Reverse image searches came up with nothing so I searched for Warrior Bash photos and noticed every year the award metal was different so I was able to pinpoint this photo to a 2015 event. Searching the 2015 event photos online I was able to pinpoint the location of the event from the “bib” numbers. This event was in Arizona. If you got to this link and type 38227 or 31033 in the “Bib/Name” field you will find the photos. From that if you download the images and zoom in you can see the names above their numbers. Samantha Grombly and Virginia Keller. From that a simple search on Facebook using those 2 names found this.

This WHOLE story is SICK and this person needs Serious mental help. I don’t think I even have to name who is behind it. You know who you are and YOU know I know WHO you are. GET HELP!!!

Happy New Year All. Please, if you have a mental disorder or know someone that has issues, GET THEM HELP!!!.

Moments after posting this Larry responded and the account deactivated.

It’s good that he has resigned but doesn’t answer a lot of questions and doesn’t state he is getting the mental help he needs. With sources telling me they know for a fact that he was the “2003 Choking Man” and reading comments on a forum from back then describing him to a “T”, there’s no doubt after this incident that Larry needs to seek help.

Anyone can help keep Hardee County officials accountable by submitting anonymous information to me at wau@wauchulahgost.com or by donating below.